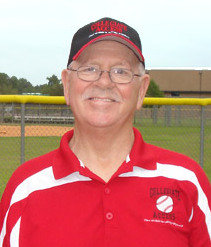 Today I learned that my childhood pitching coach, Tim Timmons, passed away. He affected my life so greatly by teaching me how to pitch, and I am so proud to have been his student!

I can still remember the day I met him at a run-down softball field in Freeport, Texas. He looked at me, held up his thumb, and said, “Hold out your finger.” I mimicked him and held out my thumb proudly. “That’s your thumb,” he said with a smirk. AAAAaaahhhh! He got me! This joke was one of his most famous, and one that took me about 9 times until I held out my finger like he asked! Thank you Tim for all the memories!

“If a person can effect just one other person for good then a legacy has been started and the ripple effect for future good can be immense. I don’t think anyone knows how many thousands of athletes came through Tim’s influence but the ripple effect is really more like a tidal wave. Tim was one of softball’s biggest supporters and best teachers of the game. Anyone who came into Tim’s life at some point says ‘Tim’s the best.'”

Here is his obituary. Rest in peace, Tim.